As an independent consultant, do you know? 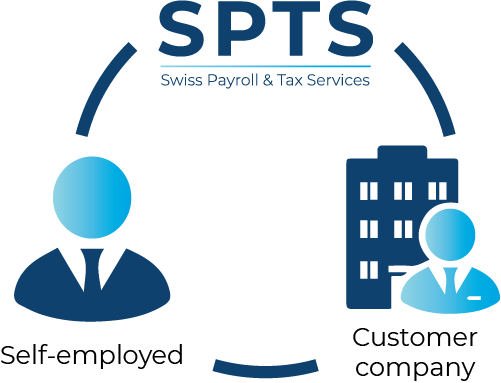 Contact us for a simple simulation of your case, without any engagement

Why Wage Portage for Independent Consultants is benefitial?

Your benefits by declaring as a Swiss salaried employee:

The first pillar is the state pension. Known as "OASDI" (old age, survivor and disability insurance), it aims to cover the basic cost of living after reaching retirement age or in the event of death or disability. This pillar is compulsory for everyone living and/or working in Switzerland.

The second pillar is an occupational benefit plan. In combination with the first pillar it ensures that the insured person can maintain their pre-retirement standard of living. This pillar is compulsory for anyone who is employed in Switzerland and who earns more than a specified minimum wage.

The third pillar is a voluntary pension, allowing individuals to set money aside for their retirement.

The second and third pillar offer tax optimisation possibilities: in principle, contributions are tax deductible and capital payments are taxed at a privileged tax rate.

Additional voluntary contributions (so-called purchases) into the second pillar allow individuals to fill any gaps in the retirement savings and to improve their financial situation after retirement. These purchases are fully tax deductible (i.e. deductible from the taxable income). For individuals moving to Switzerland who have never participated in the Swiss pension scheme, the annual purchases into the second pillar are limited to 20% of their insured salary during the first five years.

If all or part of the savings in the second pillar are paid out as capital, this capital is taxed at a privileged tax rate and generally without consideration of any other income (meaning no progression effect). However, most cantons take any capital payments within a certain period from both the second and third pillar (type 3a, explained below) into consideration when determining the tax rate (resulting in a progression effect here).

All SPTS Employees who are living in Switzerland and are paid at least 587 francs per month are entitled to family allowances.

Family allowances are both a social security and family policy matter. The purpose of these benefits is to partially compensate for the costs of raising children. There are three types of family allowance: child’s allowance, education allowance and birth/adoption allowance.

Children giving entitlement to allowances are:

Where there is an occupational accident or illness of a worker, SPTS will inform the insurer and supply all the data surrounding the accident to the insurers.

Unemployment Allowances(in case of no renewing of your contract)

All workers in Switzerland who have not yet reached retirement age are insured against unemployment. Contributions are split between the employer and the employee. To receive payments, the following conditions must be met:

Amount : The amount that you are entitled to is calculated according to a reference salary based on the last six months of salary subject to contribution. The beneficiary is usually entitled to 70 percent of the reference salary. If they have one or more children and the allowance falls below a predetermined rate the amount due can go up to 80 percent. Benefits are calculated on the basis of a daily allowance paid over five days and will begin following five days of proven unemployment. A maximum of 400 allowances can be paid over a two-year period. A person over 55 years is entitled to 520 allowances paid over a two-year period.

Payments : Unemployment benefits are issued at a Benefit Payment Office chosen when registering at the employment office. Benefits are only given to those who continue living in Switzerland. If the beneficiary leaves the country, the payments will be cancelled. If the residence permit expires during this time it will automatically be renewed for the remainder of the time that benefits are entitled.

Choosing SPTS Wage Portage for Independent Consultants is choosing to:

Work with a high quality and cost-efficient services

SPTS services are carried out with the utmost discretion and in a time efficient manner by highly skilled and experienced specialists. We offer consultancy which is individually tailored to meet your needs in
various fields. Our experts are always up-to-date with current global trends and ensure to provide the most competent advice and general developments from around the world. Our experts speak a range of
languages including French and English.

The "ALL-IN Package" of SPTS